COVID-19: New Zealand is currently at the Orange setting in the traffic light system.

Find out more about what the Orange traffic light setting means for landlords and tenants.

When a tenant or landlord breaches the Residential Tenancies Act, it’s important to understand what you can do to put it right.

What is a breach

The Residential Tenancies Act 1986 (the Act) sets out the rights and responsibilities of landlords and tenants. When someone doesn’t follow the rules, it is called a breach of the Act. Someone can breach the Act by:

What is an unlawful act

Some breaches are serious and are considered an unlawful act.

For example, a landlord interfering with a tenant’s quiet enjoyment of their home is a breach of the Act. But if it continues to the point that it’s considered harassment, it’s an unlawful act.

Any attempts to avoid the responsibilities a person has under the Act can be deemed an unlawful act by the Tenancy Tribunal.

Exemplary damages can be awarded for unlawful acts

When someone commits an unlawful act, the affected person can apply to the Tenancy Tribunal for ‘exemplary damages’. This means that the person who committed the act pays a financial penalty to the affected person. Exemplary damages can’t be awarded for ‘ordinary’ breaches that are not an unlawful act but the Tribunal can still make other orders, including an order for compensation.

Before awarding exemplary damages, the Tenancy Tribunal will consider:

Schedule 1A of the Act(external link) lists the maximum amounts that can be awarded by the Tenancy Tribunal for certain unlawful acts.

Decisions the Tribunal can make

Remedying a breach of the Act

What you do to fix a breach of the Act is called a remedy. Some breaches can be remedied, but others can’t.

The Act says what needs to happen when someone doesn’t follow the rules. The remedy will depend on what the problem or breach is:

If you think your tenant or landlord has breached the act, talk to them about it first. They may not know that what they’ve done is a breach and it could be easily solved.

Remedy a breach – where the tenancy may be ended

When a breach happens, you can send the person who is in breach a 14-day notice to remedy. The notice tells them what they’ve done to breach the agreement, what they need to do to fix it, and how long they have to fix it.

The 3 most commons types of 14-day notice to remedy are:

The 14 days are calendar days, not working days. You need to allow for service time when you calculate the time you’re giving the other person to fix the problem.

If you send a 14-day notice to remedy and the person does not fix the problem within the time allowed, you can apply to the Tenancy Tribunal to sort the matter out.

As part of your application you can seek to end the tenancy. You can also require the other person to do something like fix a leaking roof or pay the rent. You may also be able to seek exemplary damages and compensation, which the Tribunal can order if that’s appropriate.

Applying to the Tenancy Tribunal

The landlord may also apply for termination of the tenancy on a date when the rent is 21 days or more in arrears. In this situation the landlord does not need to give the tenant a 14-day notice to remedy.

Wayne’s landlord was worried when he saw that Wayne was 2 weeks behind in his rent.

He issued Wayne a 14-day notice to remedy which means that Wayne has 14 calendar days to pay the rent he owes, as well as continuing to pay the current rent.

Mary’s landlord lives in another city and she has rung time and time again to get the hot water cylinder looked at, as well as the lino in the bathroom fixed. She is at a loss about what to do next.

Mary can issue her landlord a 14-day notice to remedy – telling the landlord what is wrong and what the landlord needs to do.

If the landlord does not fix the problems, Mary can apply to the Tenancy Tribunal for a work order to get the work done by a certain date, compensation for the inconvenience, possibly ‘exemplary damages’ if the breach is an unlawful act.

If Mary wanted to – she could also ask the Tenancy Tribunal to end the tenancy, for example if Mary was in a fixed-term she wanted to get out of.

If a breach happens, the other person may just want the issue fixed. These may be less serious breaches of the Act, or breaches that don’t affect you as much.

You can still send a notice to remedy the problem, but instead of giving them a minimum of 14 days you can decide what you think is a reasonable time to fix the issue. If the issue isn’t resolved once the time is up, you can apply to the Tenancy Tribunal.

Toby the tenant has an oven where two of the elements are not working correctly.

All he wants is for the landlord to fix them so he can cook dinner for himself and the family. He tried a few times to get in touch with the landlord but couldn’t.

Toby can issue the landlord a notice to remedy that contains a reasonable amount of notice for his landlord to get an electrician around.

If the landlord does not get the oven fixed, Toby could apply to the Tenancy Tribunal seeking a work order requiring the landlord to fix the problem and possibly compensation if they can show that they have suffered a high level of inconvenience.

Louise the landlord went to inspect Tim’s tenancy. She had given him the correct notice and had arranged to meet him there. Unfortunately Tim got called into work and couldn’t make it.

When she inspected the property she noticed that the lawns and gardens were a bit overgrown.  As well as talking to Tim about the problem, and agreeing that they would be done within a week, Louise could send a notice to remedy to have the lawns mown within the agreed time.

If Tim didn’t mow the lawns within the time given – Louise could either:

Breaches that can’t be remedied

Some breaches can’t be fixed or undone. If this happens, the affected person can apply to the Tenancy Tribunal to have the tenancy ended or other remedies, such as exemplary damages if appropriate.

Serious, ongoing or repeat breaches of the Act

If you are concerned about serious or ongoing breaches of the Act that affect vulnerable people, you can contact the team.

About the Compliance and Investigations team 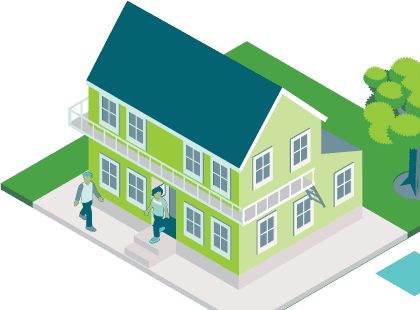